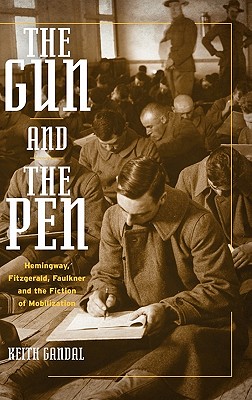 The Gun and the Pen: Hemingway, Fitzgerald, Faulkner, and the Fiction of Mobilization

Ernest Hemingway, F. Scott Fitzgerald, and William Faulkner stand as the American voice of the Great War. But was it warfare that drove them to write? Not according to Keith Gandal, who argues that the authors' famous postwar novels were motivated not by their experiences of the horrors of war but rather by their failure to have those experiences. These 'quintessential' male American novelists of the 1920s were all, for different reasons, deemed unsuitable as candidates for full military service or command. As a result, Gandal contends, they felt themselves emasculated--not, as the usual story goes, due to their encounters with trench warfare, but because they got nowhere near the real action. Bringing to light previously unexamined Army records, including new information about the intelligence tests, The Gun and the Pen demonstrates that the authors' frustrated military ambitions took place in the forgotten context of the unprecedented U.S. mobilization for the Great War, a radical effort to transform the Army into a meritocratic institution, indifferent to ethnic and class difference (though not to racial difference). For these Lost Generation writers, the humiliating failure vis-a-vis the Army meant an embarrassment before women and an inability to compete successfully in a rising social order, against a new set of people. The Gun and the Pen restores these seminal novels to their proper historical context and offers a major revision of our understanding of America's postwar literature.

Title: The Gun and the Pen: Hemingway, Fitzgerald, Faulkner, and the Fiction of Mobilization

The Gun and the Pen: Hemingway, Fitzgerald, Faulkner, and the Fiction of Mobilization