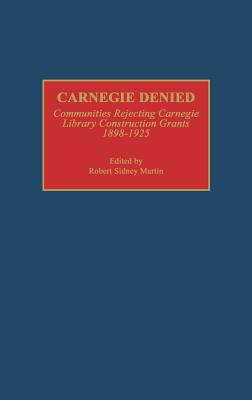 A clean, umarked copy in excellent condition. Bibliographic label on inside of front boards.

Andrew Carnegie was the foremost supporter of public library construction to the point that Carnegie Library became a cliche, synonymous with the public library, especially in small towns. Yet some communities that asked for Carnegie's funds to build a library later took public action to decline the funds. Because he was viewed as a robber baron, it has been assumed that these refusals were motivated by a desire not to take tainted money. This work documents that this was rarely the case. Indeed, there were many reasons for opposition to the Carnegie library grants. In some cases, local authorities remained unconvinced of the need for a public library. Some communities were under legal or financial restrictions that prevented them from taxing themselves in support of the library. In some, there was simply opposition to increasing the tax burden; in others the opposition focused on the perception that Carnegie was building memorials to himself.

Experienced historians were commissioned to conduct thorough studies of regional clusters. The authors made the broadest possible use of primary sources, including public archives, manuscript collections, local newspaper accounts, and the records of the Carnegie Corporation in the Library of Congress. Of particular relevance were the files of the Carnegie Library Correspondence, documenting most of the history of first, Andrew Carnegie's--and later, the Carnegie Corporation's--program to fund library construction programs.