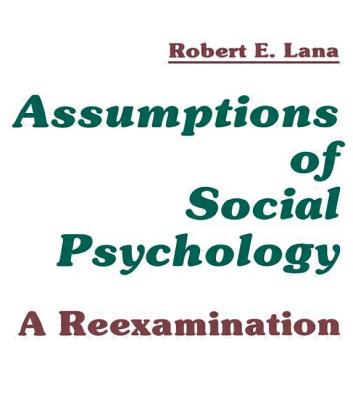 Assumptions of Social Psychology: A Reexamination

A clean, unmarked copy with a tight binding. 145 pages.

This book is a thorough revision of the successful Assumptions of Social Psychology, first published in 1969. Reexamining the implicit and explicit assumptions concerning inquiry as to the nature of the human organism, it takes as its major thesis the idea that the epistemologies utilized by social psychologists -- encompassing behavioral, intentional, and historical analyses -- are complementary rather than contradictory. After examining key figures in the history of Western epistemology, such as Descartes, Vico, Hume, and Kant, contemporary issues such as the nature of causation, intentions, behavior, rhetoric, and hermeneutics are discussed. A major thesis is that the epistemologies utilized by social scientists encompassing behavioral, cognitive, and historical analyses are complimentary rather than contradictory. In order to demonstrate this, the historical underpinnings of social psychological epistemologies and an argument for the complimentarity of major social psychological theoretical approaches are developed. Most importantly, some of the possibilities for building explanation of social phenomena, which are alternatives to existing forms of explanation, are discussed.

Assumptions of Social Psychology: A Reexamination