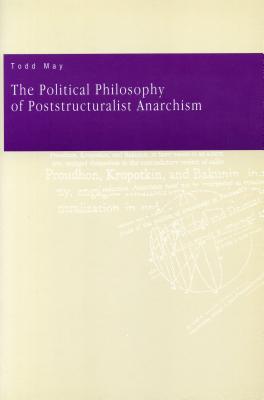 The Political Philosophy of Poststructuralist Anarchism

A clean, unmarked copy with a tight binding. Top of spine has been bumped, leaving a half inch tear on cover. 165 pages.

The political writings of the French poststructuralists have eluded articulation in the broader framework of general political philosophy primarily because of the pervasive tendency to define politics along a single parameter: the balance between state power and individual rights in liberalism and the focus on economic justice as a goal in Marxism. What poststructuralists like Michel Foucault, Gilles Deleuze, and Jean-Fran ois Lyotard offer instead is a political philosophy that can be called tactical: it emphasizes that power emerges from many different sources and operates along many different registers. This approach has roots in traditional anarchist thought, which sees the social and political field as a network of intertwined practices with overlapping political effects. The poststructuralist approach, however, eschews two questionable assumptions of anarchism, that human beings have an (essentially benign) essence and that power is always repressive, never productive.

The Political Philosophy of Poststructuralist Anarchism