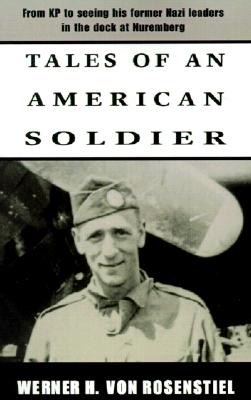 Tales of an American Soldier: From KP to Seeing His Former Nazi Leaders in the Dock at Nuremberg

A clean, unmarked copy with a tight binding. 314 pages. Signed by author.

This is the true tale of a German Lawyer and former memeber of Hitler's army who becomes an American lawyer and is drafted into the U.S. Army. Subjected to interrogations and posted to units where the army can keep him away from anything important, this private pulls a lot of KP, gets sent to a unit consisting of enemy aliens and assigned to a Quartermaster Laundry Battalion. When it is determened that he is not a spy, he is shipped to Europe with an airborne unit. Eventually the army uses his background to its advantage, promoting him to second lieutenant and sending him to War Crimes Unit in Germany to read secret files. He encounters Herman Goering, Albert Speer and other Nazis when assigned to Justice Jackson's staff tor the War Crimes Trails in Nuremberg.

Title: Tales of an American Soldier: From KP to Seeing His Former Nazi Leaders in the Dock at Nuremberg

Tales of an American Soldier: From KP to Seeing His Former Nazi Leaders in the Dock at Nuremberg