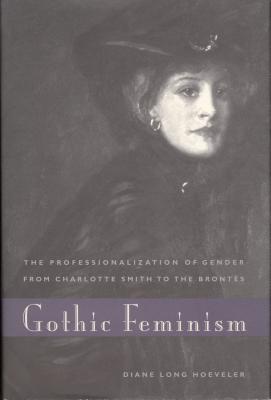 Gothic Feminism: The Professionalization of Gender from Charlotte Smith to the Brontes

Ex-library copy with usual stamps, stickers, etc. Binding is solid and text/interior is clean and free of marking of any kind. 250 pages, sharp corners.

As British women writers in the late eighteenth and early nineteenth centuries sought to define how they experienced their era's social and economic upheaval, they helped popularize a new style of bourgeois female sensibility. Building on her earlier work in Romantic Androgyny, Diane Long Hoeveler now examines the Gothic novels of Charlotte Smith, Ann Radcliffe, Jane Austen, Charlotte Dacre Byrne, Mary Shelley, and the Bront s to show how these writers helped define femininity for women of the British middle class.

Hoeveler argues that a female-created literary ideology, now known as "victim feminism," arose as the Gothic novel helped create a new social role of professional victim for women adjusting to the new bourgeois order. These novels were thinly disguised efforts at propagandizing a new form of conduct for women, teaching that "professional femininity"--a cultivated pose of wise passiveness and controlled emotions--best prepared them for social survival. She examines how representations of both men and women in these novels moved from the purely psychosexual into social and political representations, and how these writers constructed a series of ideologies that would allow their female characters--and readers--fictitious mastery over an oppressive social and political system.

Gothic Feminism takes a neo-feminist approach to these women's writings, treating them not as sacred texts but as thesis-driven works that attempted to instruct women in a series of strategic poses. It offers both a new understanding of the genre and a wholly new interpretation of feminism as a literary ideology.

Title: Gothic Feminism: The Professionalization of Gender from Charlotte Smith to the Brontes

Gothic Feminism: The Professionalization of Gender from Charlotte Smith to the Brontes