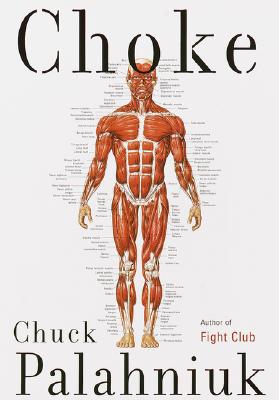 From the author of the international sensation Fight Club, a powerful (and hilarious) novel about love and strife between mothers and sons, the addictive power of sex, the terrors of aging, the ugly truth about historical theme parks, and much else...
Fight Club, Chuck Palahniuk's controversial and blazingly original debut novel, introduced a fresh and even renegade talent to American fiction, one who has retooled the classic black humor of Terry Southern and Kurt Vonnegut for the lunacy of the millennial age. In his new novel, Choke,"" he gives readers a vision of life and love and sex and mortality that is both chillingly brilliant and teeth-rattlingly funny.
Victor Mancini, a dropout from medical school, has devised a complicated scam to pay for his mother's elder care: Pretend to be choking on a piece of food in a restaurant and the person who "saves you" will feel responsible for the rest of his life. Multiply that a couple of hundred times and you generate a healthy flow of checks, week in, week out. Between fake choking gigs, Victor works at Colonial Dunsboro with a motley group of losers and stoners trapped in 1734, cruises sex addiction groups for action ("You put twenty sexaholics around a table night after night and don't be surprised."), and visits his mother, whose anarchic streak made his childhood a mad whirl and whose Alzheimer's disease now hides what may be the startling truth about his (possibly divine?) parentage. An antihero for our deranging times, Victor's whole existence is a struggle to wrest an identity from overwhelming forces. His creator, Chuck Palahniuk, is the visionary we need and the satirist we deserve.