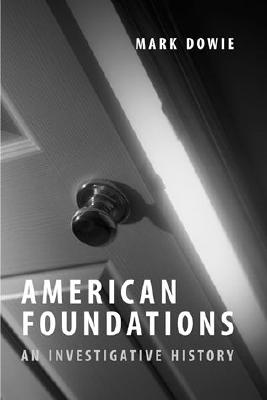 In American Foundations, Mark Dowie argues that organized philanthropy is on the verge of an evolutionary shift that will transform America's nearly 50,000 foundations from covert arbiters of knowledge and culture to overt mediators of public policy and aggressive creators of new orthodoxy. He questions the wisdom of placing so much power at the disposal of nondemocratic institutions.As American wealth expands, old foundations such as Ford, Carnegie, Rockefeller, Pew, and MacArthur have grown exponentially, while newer trusts such as Mott, Johnson, Packard, Kellogg, Hughes, Annenberg, Hewlett, Duke, and Gates have surpassed them. Foundation assets now total close to $400 billion. Though this is a tiny sum compared to corporate and government treasuries, and foundation grants still total less than 10 percent of contributions made by individuals, foundations have power and influence far beyond their wealth. Their influence derives from the conditional nature of their grant making, their power from its leverage.Unlike previous historians of philanthropy who have focused primarily on the grant maker, Dowie examines foundations from the public's perspective. He focuses on eight key areas in which foundations operate: education, science, health, environment, food, energy, art, and human services. He also looks at their imagination, or lack thereof, and at the strained relationship between American foundations and American democracy.Dowie believes that foundations deserve to exist and that they can assume an increasingly vital role in American society, but only if they transform themselves from private to essentially public institutions. The reforms he proposes to make foundations more responsive to pressing social problems and more accountable to the public will almost certainly start an important national debate.

Description: Ex-library stamp, but no other library marks. Inscribed by the author.