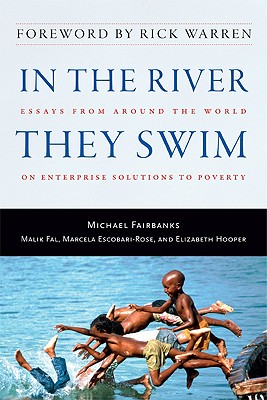 In the River They Swim: Essays from Around the World on Enterprise Solutions to Poverty

A new, unread copy in excellent condition. Signed by author on bookplate.

The sociologist Thomas Sowell writes, "We need to confront the most blatant fact that has persisted across centuries of social history vast ddifferences in productivity among peoples, and the economic and other consequences of such differences." Poverty demeans dignity, shrinks the soul, wastes potential, and inflicts suffering on three billion people on our planet. We must also acknowledge that, during the past fifty yyears, the record in international assistance to the least developed countries has been disappointing; the economics-based abstractions developed in the think tanks of Europe and North America are insufficient.

In the River They Swim is the antithesis to that search for solutions the next big theory of global poverty. From the fresh perspective of advisors on the frontlines of development to the insight of leaders like President Paul Kagame of Rwanda and Pastor Rick Warren, it tells the story of change in the microcosms of emerging businesses, industries, and governments. These essays display a personal nature to their work that rigorous analysis alone cannot explain.

We learn that a Sufi master can teach us about the different levels of knowledge, the "different ways to know a river." These practitioners could have written about its length, its source, its depth, its width, the power of its current, and the life it contains. They could have invested time and money to travel to that river so that they could sit on its shores and look at it, feel the sand that borders it, and watch the birds at play over it. Instead, they dove in to swim in the river, felt its current along their bodies, and tasted something of it. They wondered, briefly, if they had the strength to swim its length, and now they share the answer.

If human development is a river, the authors in this volume, and perhaps some readers, will no longer be satisfied to stand along its banks.

Title: In the River They Swim: Essays from Around the World on Enterprise Solutions to Poverty

In the River They Swim: Essays from Around the World on Enterprise Solutions to Poverty