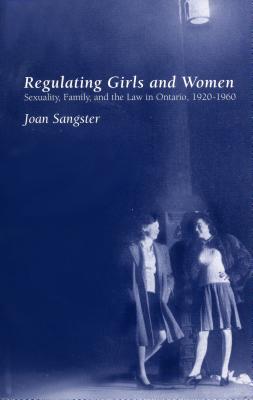 Regulating Girls and Women: Sexuality, Family, and the Law in Ontario, 1920-1960

For people living in Ontario, as throughout Canada, the period from 1920 to 1960 was one of great change and turmoil - the roaring twenties the Great Depression, the upheaval of war, and the economic boom of the postwar years. One constant in society over those years, however, was the differential treatment that females and males received before the law, especially in regard to family matters and sexuality. A patriarchal justice system, increasingly under the influence of 'expert' opinion from social workers, psychologists, psychiatrists, and other medial doctors, openly espoused a sexual double standard and sough to regulate the behaviour of girls and women 'for their own good'. Indeed, women in physically abusive relationships were at times advised by judges, probation officers, and social workers to 'go home and sleep with your husband' on the assumption that keeping him sexually sated would end the violence.

In this fascinating study of sexuality, family, and the law, historian Joan Sangster focuses on key issues that drew women into the courts, as plaintiffs and defendants: incest and sexual abuse, wife assault, prostitution, female delinquency, and the unique 'colonization of the soul' that Aboriginal women had to endure before the law. As Sangster writes: 'While history does not offer pat solutions to present dilemmas, it may stimulate some sobering second thoughts on current debates - by dissecting the changing definitions of criminality and the process by which law constituted gender, race, and class relations; by mounting a critique of past reform efforts; and, importantly, by suggesting how the law affected the lives of girls and women who came into conflict with it.'

Title: Regulating Girls and Women: Sexuality, Family, and the Law in Ontario, 1920-1960

Description: A clean, unmarked copy with a tight binding. 278 pages.

Regulating Girls and Women: Sexuality, Family, and the Law in Ontario, 1920-1960