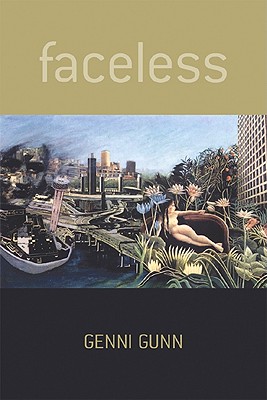 In Faceless, Genni Gunn explores the impulse for the edge, a magnetic field between the gloss of the topside world and the grit of the world beneath. Both these landscapes are fascinating and treacherous, haunted by faces that are obsessively worn and shed, torn off and replaced, where identity itself is arbitrary. Impersonation, even of oneself, is the rule. In a piano bar, the musician is a chameleon adapting to the faceless men who sit around her piano. The faceless cadavers in the notorious BodyWorlds exhibits stalk the rooms while, in Gunn's title poem, an ordinary French woman finds redemption in the world's first face transplant after being mauled in a strange accident by her pet dog. To be anonymous in today's urban places is to be free yet isolated, to be in a constant flux of longing for and fear of the dead and beating heart, both in one's own breast and those faltering in the chests of others. The countless faces that Gunn confronts on the streets of the city or behind closed doors make her important new book such a compelling readas does the delicious anxiety she sees hanging in ecstatic, sometimes terrifying suspense in the liminal spaces between.