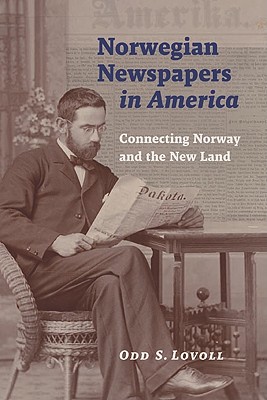 Norwegian Newspapers in America: Connecting Norway and the New Land

In the nineteenth century, the United States, "the land of newspapers," was also fast becoming the land of immigrants, with increasing numbers of Norwegians arriving amid the European influx. Already Skandinaven, published out of Chicago, kept newcomers and their Old World friends and family informed of political, religious, and social matters discussed in burgeoning Norwegian American communities.

From 1847 to today, more than 280 Norwegian-language papers were launched in cities ranging from Minneapolis to Fargo, Boston to Seattle. Some lasted just a few months; others continued for decades; all contributed to a developing Norwegian- American perspective. Odd Lovoll traces newspaper ventures both successful and short lived to offer a comprehensive look at America's Norwegian-language press. Highlighting
diligent editors and analyzing topics of interest to readers through the years, Norwegian Newspapers in America demonstrates how newspapers pursued a twofold goal: forging a bridge to the homeland while nurturing cultural practices in the New World. Odd S. Lovoll is professor emeritus of history at St. Olaf College and the author of numerous
books, including Norwegians on the Prairie: Ethnicity and the Development of the Country Town and
A Century of Urban Life: The Norwegians in Chicago before 1930.

Norwegian Newspapers in America: Connecting Norway and the New Land