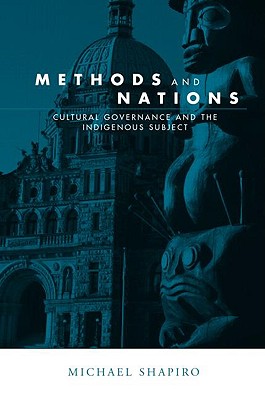 Methods and Nations: Cultural Governance and the Indigenous Subject

A clean, unmarked copy with a tight binding. 258 pages.

Methods and Nations critiques one of the primary deployments of twentieth-century social science: comparative politics whose major focus has been "nation-building" in the "Third World," often attempting to universalize and render self-evident its own practices. International relations theorists, unable to resist the "cognitive imperialism" of a state-centric social science, have allowed themselves to become colonized. Michael Shapiro seeks to bring recognition to forms of political expression-alternative modes of intelligibility for things, people, and spaces-that have existed on the margins of the nationhood practices of states and the complicit nation-sustaining conceits of social science.

Title: Methods and Nations: Cultural Governance and the Indigenous Subject

Methods and Nations: Cultural Governance and the Indigenous Subject