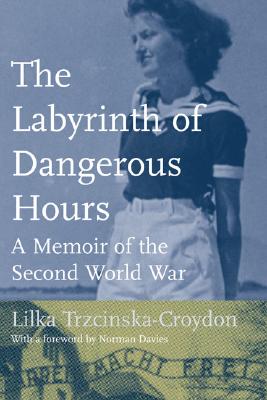 The Labyrinth Of Dangerous Hours: A Memoir Of The Second World War

Ex-library copy with the usual stamps and markings. 152 pages.

Lilka Trzcinska was fourteen years old when the Nazis invaded Poland in 1939. The daughter of an architect, Lilka was a high school student at the time. When schools were closed by the occupier, she, along with her siblings, continued their education in secret classes, and joined the Polish Home Army- the secret resistance force.

Lilka and her family were arrested by the Gestapo in 1943 and sent to the political prison Pawiak, then to Auschwitz. There, Lilka's mother died and her younger sister was sent off to another camp. The rest of the family was put to work in the camp building offices. After being transported to a number of other camps (in one instance by a way of a three-day march), the three sisters were reunited in 1945, and shortly thereafter liberated by the British. Lilka later went to Italy to continue her education, moving to Canada in 1948.

"The Labyrinth of Dangerous Hours" is the memoir of a survivor. Lilka Trzcinska-Croydon narrates her adolescence and that of her sisters and brother in a way that binds poetry and history together seamlessly. It describes the strength of the family ties and solidarity that help them emerge from their horrific ordeal with their dignity intact.

As many as 150,000 Polish political prisoners were taken during the war, half of whom died in the camps. This memoir is a testament to their struggle.

Title: The Labyrinth Of Dangerous Hours: A Memoir Of The Second World War

The Labyrinth Of Dangerous Hours: A Memoir Of The Second World War