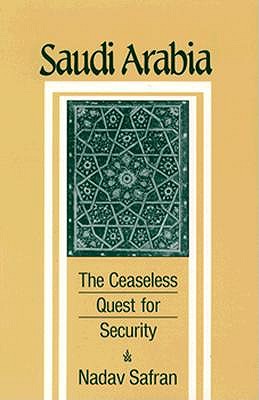 A clean, attractive copy with a tight binding. 524 pages.

Combining vast scholarship and a deep understanding of Arab culture, Nadav Safran has written a sophisticated book about the politics of Saudi Arabia. In a narrative that emphasizes the Saudis' sense of the precariousness of their state and of their position in the Middle East, Safran demystifies the behavior of the Kingdom's rulers.

Security has long been the predominant concern of Saudi Arabia. In 1981, the Kingdom's defense and security budget was an immense $25 billion, the fourth largest in the world, after the United States, the Soviet Union, and China, and the highest in the world on a per capita basis. Safran traces the roots of Saudi preoccupation with security through half a century, discerning political struggles and policy differences in the Saud family and how they have affected the position of the country. His treatment provides an enlightening perspective on the interplay of the politics of the elite; shifting inter-Arab alignments and rivalries; war, revolution, and other cataclysmic events in the Persian Gulf; the ongoing Arab-Israeli conflict; and the involvement of the United States in the Middle East.