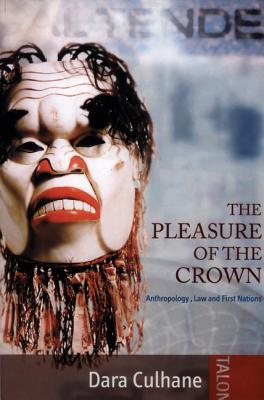 Pleasure of the Crown: Anthropology, Law and First Nations, The

Anthropologists have traditionally studied Europe's "others" and the marginalized and excluded within Europe's and North America's boundaries. This book turns the anthropologist's spyglass in the opposite direction: on the law, the institution that quintessentially embodies and reproduces Western power.
"The Pleasure of the Crown" offers a comprehensive look at how Canadian, particularly British Columbian, society "reveals itself" through its courtroom performances in Aboriginal title litigation. Rather than asking what cultural beliefs and practices First Nations draw on to support their appeals for legal recognition of Aboriginal title, Culhane asks what assumptions, beliefs, and cultural values the Crown relies on to assert and defend their claims to hold legitimate sovereignty and jurisdiction over lands and resources in B.C. What empirical evidence does the Crown present to bolster its arguments? What can thus be learned by anthropologists and the public at large about the historical and contemporary culture of the powerful?
Focusing in particular on the Gitksan and Wet'suwet'en case, the book traces the trial of Delgamuukw. v. Regina from its first hearing during 1987 and 1991 to its successful appeal to the Supreme Court of Canada, which issued a landmark ruling on the case on December 11, 1997.

Title: Pleasure of the Crown: Anthropology, Law and First Nations, The

Description: As-new, with no blemishes of any kind or marking to text/interior.

Pleasure of the Crown: Anthropology, Law and First Nations, The