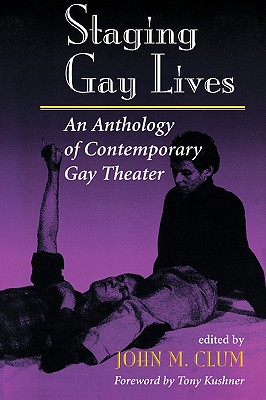 A clean, unmarked copy with a tight binding. 472 pages.

Created for general and scholarly audiences alike, this volume offers ten of the best recent plays by and about gay men, all of which have been successfully produced and critically acclaimed in the United States and England. The playwrights, who reflect multicultural origins ranging from Anglo to African American and Latino, have crafted powerful and insightful depictions of the roles gay men play in gender politics.Each play is explosive, politically and socially relevant, and enlightening, whether it be Martin Sherman's much-praised A Madhouse in Goa or the avante-garde Pomo Afro Homos' Dark Fruit. The first to offer such a diversity of voices, this collection also crosses generational borders. Included are two of the first and most important modern gay playwrights?Martin Sherman and Peter Gill?as well as exciting younger dramatists who have emerged in the ?gay nineties.?Illustrating the sexual politics and events that have swirled through mainstream society since the Stonewall rebellion in the 1960s?AIDS, homophobia, transgendering, discrimination, violence?these plays offer essential and direct articulation of the human lives involved. Each of these plays in its own unique way deeply investigates the pain, sorrow, joy, and beauty of being gay in a predominantly heterosexual world.