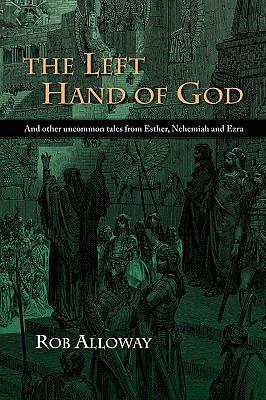 The Left Hand of God: And other uncommon tales from Esther, Nehemiah and Ezra

""The Left Hand of God" brings a biblically soaked imagination to the craft of storytelling. In these three stories, Rob Alloway makes the most of the scant materials that the Bible preserves for us. He provides us with memorable and believable companions as we glean in the fields of Scripture. I hope this book will bring as much pleasure to others as it has to me "
Eugene H. Peterson, Professor Emeritus of Spiritual Theology
Regent College, Vancouver B.C.
Imagine the Bible as a very long stage play. Just before the curtain comes down on a four hundred year intermission between the Old and New Testaments, three intense, but enigmatic scenes are presented.
A beauty contest is held in the city of Susa to select the next queen of Persia. The winner is a mysterious girl named Esther. But a sudden Imperial edict, impossible to revoke, orders the execution of all Jews. Only then does the king learn that his new queen is Jewish.
Shift from Susa, with its harem intrigues and violent murders, to the quiet rubble of Jerusalem, still in ruins from an earlier drama. A feisty man called Nehemiah, cupbearer to the Persian King, arrives and rebuilds the walls in less than sixty days despite treacherous opposition. He is the man of the hour At least, that is what his memoirs suggest. But there are other opinions.
In the midst of Nehemiah's schemes for urban renewal a holy man arrives. His name is Ezra and he brings with him an equally holy book called Torah. It sparks a revival that is both brilliant and tragic. Deciding who exactly is "in" the family of God and who is "out," is answered with little grace.
By carefully placing the canonical books of Esther, Nehemiah and Ezra within the larger Persian history, Rob Alloway creates a credible context in which these three truly "uncommon tales" may be appreciated in all their earthy authenticity.
Rob Alloway has written two other award-winning, collections of Old Testament Bible Stories: "Balaam's Revenge " (1999) and " Babylon Post" (2005).

Title: The Left Hand of God: And other uncommon tales from Esther, Nehemiah and Ezra

The Left Hand of God: And other uncommon tales from Esther, Nehemiah and Ezra