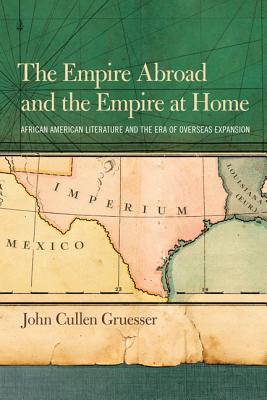 The Empire Abroad and the Empire at Home: African American Literature and the Era of Overseas Expansion

In The Empire Abroad and the Empire at Home, John Cullen Gruesser establishes that African American writers at the turn of the twentieth century responded extensively and idiosyncratically to overseas expansion and its implications for domestic race relations. He contends that the work of these writers significantly informs not only African American literary studies but also U.S. political history.

Focusing on authors who explicitly connect the empire abroad and the empire at home ( James Weldon Johnson, Sutton Griggs, Pauline E. Hopkins, W.E.B. Du Bois, and others), Gruesser examines U.S. black participation in, support for, and resistance to expansion. Race consistently trumped empire for African American writers, who adopted positions based on the effects they believed expansion would have on blacks at home. Given the complexity of the debates over empire and rapidity with which events in the Caribbean and the Pacific changed in the late nineteenth and early twentieth centuries, it should come as no surprise that these authors often did not maintain fixed positions on imperialism. Their stances depended on several factors, including the foreign location, the presence or absence of African American soldiers within a particular text, the stage of the author's career, and a given text's relationship to specific generic and literary traditions.

No matter what their disposition was toward imperialism, the fact of U.S. expansion allowed and in many cases compelled black writers to grapple with empire. They often used texts about expansion to address the situation facing blacks at home during a period in which their citizenship rights, and their very existence, were increasingly in jeopardy.

Title: The Empire Abroad and the Empire at Home: African American Literature and the Era of Overseas Expansion

The Empire Abroad and the Empire at Home: African American Literature and the Era of Overseas Expansion