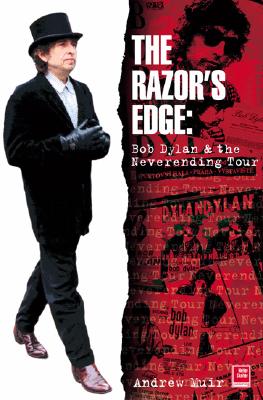 Razor's Edge: Bob Dylan and the Never Ending Tour, The

"You hear sometimes about the glamour of the road, but you get over that real fast. There are a lot of times that's no different from going to work in the morning. Still, you're either a player or you're not a player... If you just go out every three years or so, like I was doing for a while, that's when you lose your touch. If you are going to be a performer, you've got to give it your all."-Bob Dylan

While most of rock's elder statesmen rarely venture far from home, the ultimate rock icon Bob Dylan has spent practically all of his life since 1986 touring the globe-including a gig at a military academy, a private convert for Japanese businessmen and a special performance for Pope John Paul II: Why?

Respected Dylan expert Andrew Muir documents the ups and downs of this unprecedented trek, and finds time to tell the story of his own curious meeting with Dylan.

"'Excuse me Mr. Dylan' I squeak. HE MOVES-and how-the head swivels round in an instant. Dylan is staring me in the face (or at least the rivers of swat where my face should be)and says pointedly and interrogatively: 'Yeah'..."

Muir also tries to get to grips with what exactly it all means-both for Dylan and for the Bobcats: dedicated Dylan followers, like himself, who trade tapes of every show and regularly cross the globe to catch up with the latest leg of The Never Ending Tour.

Description: A clean, unmarked book with a tight binding. 224 pages.

Razor's Edge: Bob Dylan and the Never Ending Tour, The