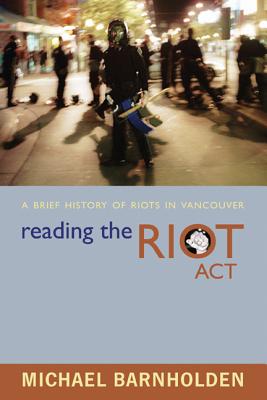 Reading The Riot Act: A Brief History Of Riots In Vancouver

A clean, unmarked book with a tight binding. 135 pages.

Literary Nonfiction. Canadian History. BC Books in BC Schools pick. "Reading the Riot Act" is a phrase that has entered the popular lexicon, meaning the action taken by authority figures when they perceive that their "charges" are getting out of hand. The act itself is a seldom-used piece of legislation actually designed to prevent a riot from taking place. Supposedly, the mere mention of the Riot Act is enough to bring hardened miscreants bent on destruction to their collective senses. But if a riot has started, it's already too late to read the Riot Act. Every city has its distinct history of rioting the Rocket Richard riots in Montreal, the Christie Pits riot in Toronto, the Winnipeg and Regina riots, even the Shakespeare riots in New York where rival factions rioted over which actor was the better interpreter of Shakespeare's work. READING THE RIOT ACT is a popular history that rereads and rewrites the legacy of riots in Vancouver. The project was conceived following the city's Stanley Cup riots in 1994, when official reports and media coverage differed significantly from eyewitness accounts. Later, media reports on the APEC riots downplayed and obscured certain facets of the conflict. Seeking out sources beyond the official reports, Barnholden has compiled a record of participants and observers, allowing the "vanquished" to have their say. Barnholden shuns the simplistic "bad apple" explanation, and explores the deeper economic causes and effects of riots.

"This book contains some stirring narrative of conflicts that have defined the history of Vancouver." Prairie Fire

..".demonstrates that even unexpected, apparently spontaneous flarings are about something deeper, from unemployment pressures, freedom of speech and inhumane conditions in prisons all the way to racism and the disappointing performances by our professional sports teams and Axl Rose, the frontman of the notorious GM Place no-show rock band Guns'n' Roses... This tapestry is woven against a backdrop of class war, demonstrating that while the rowdies ground beneath the heels of the police are always the working poor, it's suspiciously rare that they take their grievances to the neighbourhoods of their bosses... Challenging the popular conception that riots are just the result of 'a few bad apples' sowing discontent, Barnholden advances the competing thesis that the entire orchard may in fact be infested with parasites." The Columbia Journal

"Until Reading the Riot Act was published, the book containing the most detailed information on riots in Vancouver was the local police department's autobiography, A Century of Service (1986), which Michael Barnholden makes reference to in his own text. The difference with Reading the Riot Act is its focus and perspective, which presents riots as battles in the class war, as it aims to cut through the media distortion around such events and dispense with the 'bad apple' theory of their cause. It makes for a more engaging, accessible and believable read than the police department's book." Max Sartin, The RAIN TAXI Review of Books"

Title: Reading The Riot Act: A Brief History Of Riots In Vancouver

Reading The Riot Act: A Brief History Of Riots In Vancouver