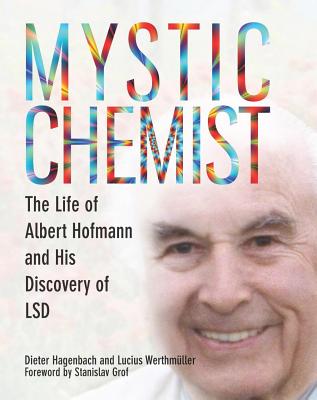 Mystic Chemist: The Life of Albert Hofmann and His Discovery of LSD

A clean, unmarked book with a tight binding. 384 pages.

Mystic Chemist begins at the start of the twentieth century, in the Swiss town of Basel which is evolving from a popular health spa into a major industrial city. The story concludes more than a century later, after celebrating Albert Hofmann's 100th birthday. It tells the unique story of a soon to be famous scientist, highlighting his academic journey, his research at Sandoz and then, as the discoverer of LSD, his meetings and interactions with illustrious writers, artists and thinkers, from all over the world, whose common interest is a fascination with the new wonder-drug. Luminaries like Aldous Huxley, Timothy Leary and Richard Alpert appear on the scene and Hofmann begins a prolific correspondence with them and other interested parties. Sometimes he sends a sample, other times he hears of their "trips" on LSD or other psychedelic substances, like mescaline or psilocybin. From the beginning he takes a positive view towards efforts by physicians and psychotherapists to include LSD in new approaches to the treatment of illnesses. He sees the "psychedelic" potential of this "wonder drug" as beneficial to all. And he expresses his conviction that mystical experiences and trips to other worlds of consciousness are the best preparation for the very last journey he and every one of us well must eventually make. At the age of 102, Albert Hofmann dies at home. His vitality and open mindedness stay with him until his last breath. The life of Albert Hofmann, the Mystic Chemist, is a testimony to how one can reach a great age all the while remaining physically and mentally fit and spiritually aware. Mystic Chemist: The Life of Albert Hofmann and His Discovery of LSD tells the story of Albert Hofmann's life and the parallel story of the wonder-drug, LSD. The book runs to 408 pages and contains over 500 color and black and white photographs, illustrations and drawings; some of them never published before. With a foreword by world renowned Czech psychiatrist Stanislav Grof, Mystic Chemist will be published in May 2013, and is available in hardcover and softcover editions.

Title: Mystic Chemist: The Life of Albert Hofmann and His Discovery of LSD

Mystic Chemist: The Life of Albert Hofmann and His Discovery of LSD