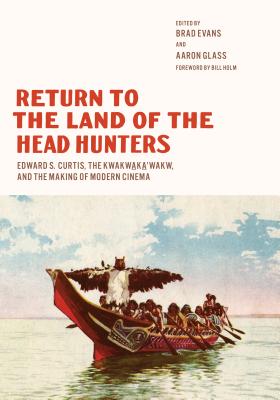 Book shows very light shelf wear to dust jacket only, no tears; otherwise book is in excellent condition and is as-new: text/interior is clean and free of marking of any kind, sharp corners to the covers, straight, solid binding. In business for 20 years, we provide excellent customer service and ship with packing material appropriate to insure that your purchase arrives undamaged.

The first silent feature film with an "all Indian" cast and a surviving original orchestral score, Edward Curtis's 1914 In the Land of the Head Hunters was a landmark of early cinema. Influential but often neglected in historical accounts, this spectacular melodrama was an intercultural product of Curtis's encounter and collaboration with the Kwakwaka'wakw of British Columbia.

In recognition of the film's centennial, and alongside the release of a restored version, Return to the Land of the Head Hunters brings together leading anthropologists, Native American authorities, artists, musicians, literary scholars, and film historians to reassess the film and its legacy. The volume offers unique Kwakwaka'wakw perspectives on the film, accounts of its production and subsequent circulation, and evaluations of its depictions of cultural practice.Like his photographs, Curtis's motion picture was meant to document a supposedly vanishing race. But as this collection shows, the film is not simply an artifact of colonialist nostalgia. Resituated within film history and informed by a legacy of Kwakwaka'wakw participation and response, the movie offers dynamic evidence of ongoing cultural survival and transformation under shared conditions of modernity.

Title: Return to the Land of the Head Hunters: Edward S. Curtis, the Kwakwaka'wakw, and the Making of Modern Cinema

Publisher: Bill Holm Ctr for the Study of Northwest Coast are & Universtiy of WA: 2014