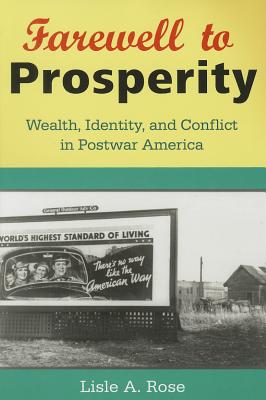 Farewell to Prosperity: Wealth, Identity, and Conflict in Postwar America

A new, unread book in excellent condition. A First Edition with the number "1" present on the number line on the copyright page.

Farewell to Prosperity is a provocative, in-depth study of the Liberal and Conservative forces that fought each other to shape American political culture and character during the nation's most prosperous years. The tome's central theme is the bitter struggle to fashion post-World War II society between a historic Protestant Ethic that equated free-market economics and money-making with Godliness and a new, secular Liberal temperament that emerged from the twin ordeals of depression and world war to stress social justice and security.
Liberal policies and programs after 1945 proved key to the creation of mass affluence while encouraging disadvantaged racial, ethnic, and social groups to seek equal access to power. But liberalism proved a zero-sum game to millions of others who felt their sense of place and self progressively unhinged. Where it did not overturn traditional social relationships and assumptions, liberalism threatened and, in the late sixties and early seventies, fostered new forces of expression at radical odds with the mindset and customs that had previously defined the nation without much question. When the forces of liberalism overreached, the Protestant Ethic and its millions of estranged religious and economic proponents staged a massive comeback under the aegis of Ronald Reagan and a revived Republican Party. The financial hubris, miscalculations, and follies that followed ultimately created a conservative overreach from which the nation is still recovering. Post-World War II America was thus marked by what writer Salman Rushdie labeled in another context "thin-skinned years of rage-defined identity politics." This "politics" and its meaning form the core of the narrative.
Farewell to Prosperity is no partisan screed enlisting recent history to support one side or another. Although absurdity abounds, it knows no home, affecting Conservative and Liberal actors and thinkers alike.

Farewell to Prosperity: Wealth, Identity, and Conflict in Postwar America