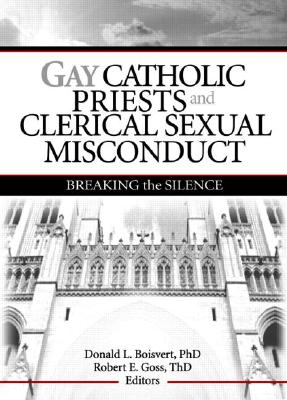 Previous owner's name on front end paper, otherwise AS NEW. Binding is solid, text/interior is clean and neat with no marking of any kind. 272 pages. In business for 21 years we provide excellent customer service and ship in padded packing material to ensure you purchase arrives undamaged.

"Why did it take 30 years for American bishops to listen to the victims of Catholic clerical abuse?"

Gay Catholic Priests and Clerical Sexual Misconduct: Breaking the Silence is a compelling indictment of Roman Catholic teachings on homosexuality and sexuality. Inspired by The Silence of Sodom: Homosexuality in Modern Catholicism, Mark Jordan's controversial examination of homoeroticism in American Catholic culture, this groundbreaking book examines how the current crisis of clerical abuse affects and stigmatizes gay priests living in a climate of hysteria and condemnation. The book's contributors, an eclectic mix of scholars and clerics, question whether the church can survive centuries of secrets and scandals.

In the wake of very real concerns about a possible inquisition launched by the Catholic Church against its gay members, Gay Catholic Priests and Clerical Sexual Misconduct continues the efforts of the Gay Men's Issues in Religion Group of the American Academy of Religion to honor the work of Mark Jordan, who contributes his thoughts on the issues raised by the book. A panel of former Jesuits, a former seminarian with the Congregation of the Blessed Sacrament, a Dominican, a Franciscan, and several feminist authors present different perspectives on gay priests, clerical/ecclesial misogyny, games of power and abuse, and religious scapegoating, writing with eloquence and pain, a great deal of pride, and a touch of justifiable divine righteousness.

Gay Catholic Priests and Clerical Sexual Misconduct: Breaking the Silence is an invaluable resource for academics, members of the clergy, seminarians, chaplains and counselors, and anyone interested in homosexuality and religion.