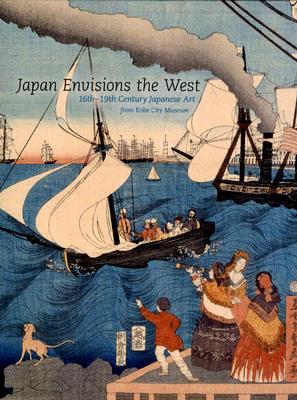 A clean, unmarked book with a tight binding. 224 pages.

This extraordinary book features significant works of art from the Kobe City Museum, whose collection focuses on Western-style Japanese art created between the sixteenth and nineteenth centuries. Japan Envisions the West considers how Japan encountered the West and learned about and adopted their arts, culture, and science, and how the West discovered Japanese arts and culture.

Maps bear important witness in telling the story of how each region recognized and understood the lands of the other. Selected maps mark milestones in illustrating each state of understanding between Japan and the West.

Portuguese and Spanish missionaries and merchants from the late sixteenth to early seventeenth centuries conveyed Western culture, religion, art, food, and music to the Japanese, and they were the first Westerners to have a strong impact in Japan. Namban refers to Japanese art created under the influence of Portugal and Spain.

After Christianity was excluded from Japan in the 1630s, Nagasaki became the only port open for trading with Dutch merchants. Artists in this region, especially painters serving the government, had the opportunity to see foreign people, culture, and art firsthand. They made visual records, copied important objects, and studied these records for their work.

When the Tokugawa Shogunate Yoshimune relaxed restrictions on imported Western books in 1720, with the exception of Christian books, scholarly artists and scientists were free to study them, leading to Komo, Japanese art created under the influence of Holland, and to more popular paintings, prints, and decorative arts that demonstrate the fusion of Japanese and Western styles. At the same time, objects were made specifically for trade with Europe through the East India Companies established in European countries.

Finally, visual images produced in the nineteenth century show the effort, surprise, and curiosity of the Japanese as they tried to understand America and Americans.