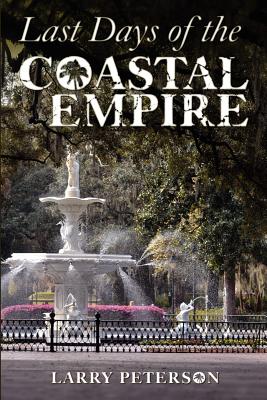 Last Days of the Coastal Empire

A clean, unmarked book with a tight binding. 318 pages.

Larry Peterson is a veteran journalist with four decades of experience as a reporter, columnist, supervising editor and freelance writer. Peterson has covered six national party conventions and numerous candidates for president, governor and Congress. He has been a city or metro editor at three daily newspapers and an editorial pages editor. His freelance work has appeared in The Wall Street Journal, Financial Times of Canada and the California Journal.
He and his wife, former Los Angeles Times reporter Lanie Lippincott Peterson, live on Tybee Island, Ga. He currently is a political reporter and columnist for the Savannah Morning News. He has received numerous state and regional honors for his writing and for projects he led and edited. He attended the University of Southern California and California State University, Long Beach, where he earned a B.A. in political science.
"A great read that will get your heart pounding and your grey cells working overtime. Awarning for those who need their eight hours of sleep a night - once you get into this book you won't want to put it down. Part political thriller, part murder mystery, and all set amid the Spanish Moss-draped oaks and salt air of Savannah."
-Dick Pettys, former Georgia capitol correspondent for Associated Press
Political reporter Mike Taylor's been there, done that. He likes to take names and kick ass. He's won awards, but his favorite trophies are the scalps of crooked or just plain dumb politicians. Starting a new job at the Clarion in Savannah, Georgia, Taylor hopes to keep his head down and just do his job. But his job always seems to draw him into the eye of a storm.And, despite its scenic charm, Savannah's no exception. Taylor joins other reporters investigating a decapitation murder. The victim turns out to have abetted a devious scheme to prop up the paper's readership figures. Then Taylor learns that Congressman Bill Hatfield has pulled strings to get the FBI to take over the case. But rather than attempting to expedite the inquiry, Hatfield wants to stall it. Taylor and his colleagues play hide-and-seek with thugs hired to stop them. They endure burglaries, a mugging, vandalism and a harrowing chase. Tension mounts - and so does the body count - as they scramble for the truth.

Last Days of the Coastal Empire