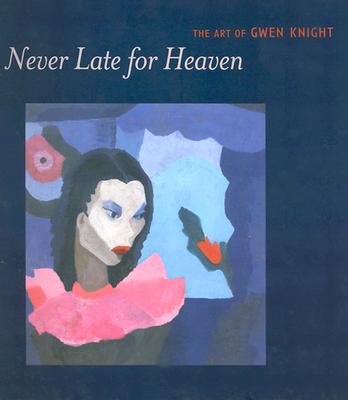 Never Late for Heaven chronicles an odyssey in American art and social events beginning with the often-romanticized Harlem Renaissance and traveling through the Great Depression and beyond. Gwen Knight's story reveals the life and the passion for painting of a young woman who was surrounded and supported by her community.

Her formal education cut short by the Depression, Knight left Howard University and returned to Harlem, where her real art education began. For several years she participated in WPA apprenticeships and workshops, guided by her own independent mind and spirit. She and her fellow painters, including Jacob Lawrence (whom she later married), immersed themselves in a world that was creating its own narrative in history, literature, music, and theater. As New York was a mecca for artists of all stripes, Harlem was a singular world within that mecca. Knight recalls that everything was alive; that she lived so rigorously in the present that there was no thought about the future. Knight and Lawrence moved to Seattle in 1971, when Jacob accepted a teaching post in the art school at the University of Washington.

Knight's paintings, spanning more than sixty years in New York and Seattle, demonstrate one artist's determination to make art. There was no career path or external motivation to drive her, only a belief that making art was a way of life. The skillful, intellectual, and emotionally sensitive works in this book pull the viewer into a world that is both controlled and fluid. Never Late for Heaven shows a painter whose long life and good fortune have delivered her to us, with her art work, right on time.

Never Late for Heaven accompanied a 2003 exhibit at the Tacoma Art Museum featuring paintings from the Francine Seders Gallery in Seattle.