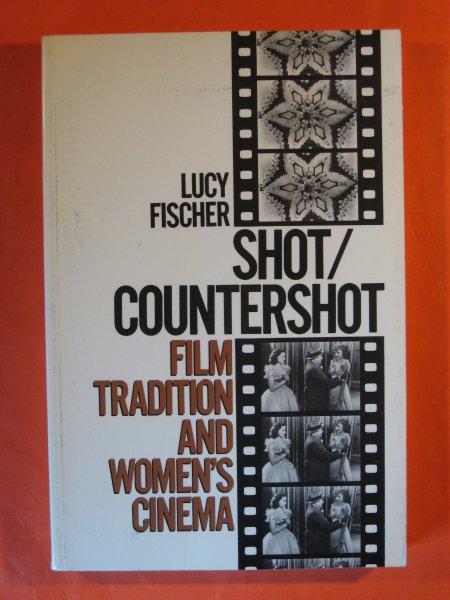 Light scuffing to covers with very slight wear to corners; creaseless covers and spine, Quite clean otherwise. Text/interior is clean and free of marking of any kind, solid binding. 348 pages, b&w photos.

Do films made by women comprise a "counter-cinema" radically different from the dominant tradition? Feminist film critics contend that women filmmakers do present from a distinctive vision, or "countershot," and Lucy Fischer argues persuasively for this view. In rich detail this book relates the idea of a counter-cinema to theories of intertextuality and locates it in the broad context of recent feminist film, literary, and art criticism. Fischer also employs an original critical model of the dialogue between women's cinema and film tradition in the very organization of the book. Each chapter discusses a theme or genre (such as the musical, the "double," the myth of womanhood, and the figure of the actress), counterposing two or more works--from the feminist and from the dominant cinema. What emerges is a fascinating picture of a women's film tradition that not only addresses but reworks and remakes the mainstream cinema.

Fischer successfully combines two main strains of feminist criticism: the deconstructive critique of the dominant culture from a feminist standpoint and the study of a feminist counterculture. Examining films from Persona and The Lady from Shanghai to Girlfriends and Sisters, or the Balance of Happiness, the book offers fresh interpretations of individual works and can, incidentally, serve as an introduction to the field of feminist film criticism.

The Princeton Legacy Library uses the latest print-on-demand technology to again make available previously out-of-print books from the distinguished backlist of Princeton University Press. These editions preserve the original texts of these important books while presenting them in durable paperback and hardcover editions. The goal of the Princeton Legacy Library is to vastly increase access to the rich scholarly heritage found in the thousands of books published by Princeton University Press since its founding in 1905.