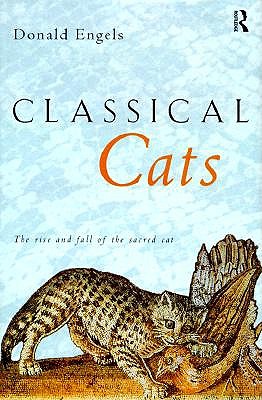 Classical Cats: The rise and fall of the sacred Cat

This is the definitive book on classical cats. The cat has played a significant role in history from the earliest times. Well known is its role in the religion and art of ancient Egypt, no less than its association with witchcraft in the Middle Ages. But when did the cat become a domestic companion and worker as well?
There has been much debate about the position of the cat in ancient Greece and Rome. Artistic representations are sometimes ambiguous, and its role as a mouse-catcher seems often to have been carried out by weasels. Yet other evidence clearly suggests that the cat was as important to Greeks and Romans as it is to many modern people.
This book is the first comprehensive survey of the evidence for cats in Greece and Rome, and of their functions and representations in art. Donald Engels draws on authors from Aesop to Aristotle; on vase-painting, inscriptions and the plastic arts; and on a thorough knowledge of zoology of the cat. He also sets the ancient evidence in the wider context of the Egyptian period that preceded it, as well as the views of the Church fathers who ushered antiquity into the Middle Ages.

Title: Classical Cats: The rise and fall of the sacred Cat

Description: A clean, unmarked book with a tight binding. 227 pages.

Classical Cats: The rise and fall of the sacred Cat