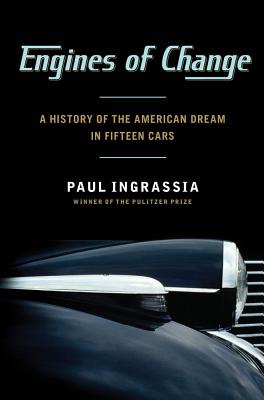 Engines of Change: A History of the American Dream in Fifteen Cars

A narrative like no other: a cultural history that explores how cars have both propelled and reflected the American experience-- from the Model T to the Prius.
From the assembly lines of Henry Ford to the open roads of Route 66, from the lore of Jack Kerouac to the sex appeal of the Hot Rod, America's history is a vehicular history--an idea brought brilliantly to life in this major work by Pulitzer Prize-winning journalist Paul Ingrassia.
Ingrassia offers a wondrous epic in fifteen automobiles, including the Corvette, the Beetle, and the Chevy Corvair, as well as the personalities and tales behind them: Robert McNamara's unlikely role in Lee Iacocca's Mustang, John Z. DeLorean's Pontiac GTO, Henry Ford's Model T, as well as Honda's Accord, the BMW 3 Series, and the Jeep, among others.
Through these cars and these characters, Ingrassia shows how the car has expressed the particularly American tension between the lure of freedom and the obligations of utility. He also takes us through the rise of American manufacturing, the suburbanization of the country, the birth of the hippie and the yuppie, the emancipation of women, and many more fateful episodes and eras, including the car's unintended consequences: trial lawyers, energy crises, and urban sprawl. Narrative history of the highest caliber, "Engines of Change "is an entirely edifying new way to look at the American story.

Title: Engines of Change: A History of the American Dream in Fifteen Cars

Description: A clean, unmarked book with a tight binding. 395 pages.

Engines of Change: A History of the American Dream in Fifteen Cars