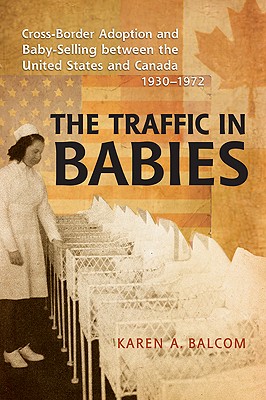 Traffic in Babies: Cross-Border Adoption and Baby-Selling between the United States and Canada, 1930-1972 (Studies in Gender and History), The

By: Balcom, Karen A.

Between 1930 and the mid-1970s, several thousand Canadian-born children were adopted by families in the United States. At times, adopting across the border was a strategy used to deliberately avoid professional oversight and take advantage of varying levels of regulation across states and provinces. The Traffic in Babies traces the efforts of Canadian and American child welfare leaders--with intermittent support from immigration officials, politicians, police, and criminal prosecutors--to build bridges between disconnected jurisdictions and control the flow of babies across the Canada-U.S. border.Karen A. Balcom details the dramatic and sometimes tragic history of cross-border adoptions--from the Ideal Maternity Home case and the Alberta Babies-for-Export scandal to trans-racial adoptions of Aboriginal children. Exploring how and why babies were moved across borders, The Traffic in Babies is a fascinating look at how social workers and other policy makers tried to find the birth mothers, adopted children, and adoptive parents who disappeared into the spaces between child welfare and immigration laws in Canada and the United States.

Title: Traffic in Babies: Cross-Border Adoption and Baby-Selling between the United States and Canada, 1930-1972 (Studies in Gender and History), The

Description: Ex-library book with the usual stamps and markings. 356 pages.

Traffic in Babies: Cross-Border Adoption and Baby-Selling between the United States and Canada, 1930-1972 (Studies in Gender and History), The