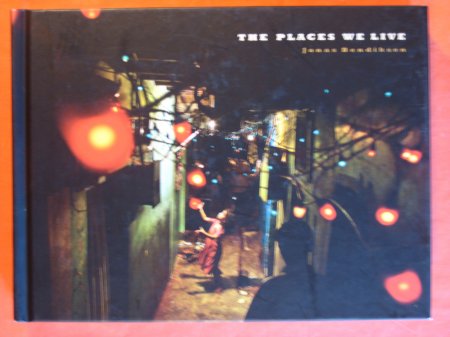 Photographs showing the homes of people who live in poverty in Nairobi, Kenya; Mumbai, India; Jakarta, Indonesia; and Crarcas, Venzuela by Norwegian photojournalist Jonas Bediksen. Pictorial cover. 8 1/8"w x 6 1/8"h. The pages fold-out to be 32 1/2" long, when open. Photographs alternate with autobiographical text by the people depicted. One gate folded page shows a slight crease where it folds into the center of the book.

The year 2008 has witnessed a major shift in the way people across the world live: For the first time in human history more people live in cities than in rural areas. This triumph of the urban, however, does not entirely represent progress, as the number of people living in urban slums--often under abject conditions--will soon exceed one billion. From 2005 to 2007 Magnum photographer Jonas Bendiksen documented life in the slums of four different cities: Nairobi, Kenya; Mumbai, India; Caracas, Venezuela; and Jakarta, Indonesia. His lyrical images capture the diversity of personal histories and outlooks found in these dense neighborhoods that, despite commonly held assumptions, are not simply places of poverty and misery. Of course, slum residents continuously face enormous challenges, such as the lack of health care, sanitation and electricity.
Innovatively designed with 20 double gatefold images that unfold to configure the four walls of each individual's home, The Places We Live tells the story of the denizens within with unusual humanity. Through its inventive design and experiential approach, The Places We Live brings the modern-day Dickensian reality of these individuals into sharp focus.
This volume includes an introduction by American author and journalist Philip Gourevitch, editor of The Paris Review and author of Standard Operating Procedure and We Wish to Inform You that Tomorrow We Will Be Killed With Our Families: Stories From Rwanda. An accompanying exhibition will open at the Nobel Peace Center, Oslo in the summer of 2008, and then tour worldwide.
A member of Magnum Photos, Jonas Bendiksen, born in Tonsberg, Norway in 1977, has received numerous awards, including the 2003 Infinity Award from the International Center of Photography and first prize in the Pictures of the Year International Awards. His photographs have appeared in National Geographic, Geo, Newsweek and the Sunday Times Magazine, among other publications. His bestselling first book, Satellites: Photographs from the Fringes of the Former Soviet Union, was published in 2006 by Aperture. In 2007, the Paris Review received a National Magazine Award for The Places We Live.

Title: The Places We Live