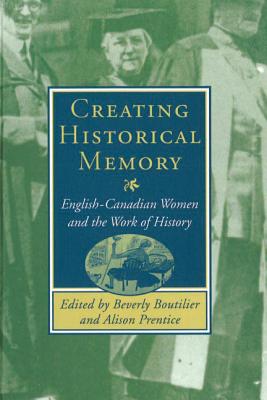 A clean, unmarked book with a tight binding. 308 pages.

Canadian women have worked, individually and collectively, at home and abroad, as creators of historical memory. This engaging collection of essays seeks to create an awareness of the contributions made by women to history and the historical profession from 1870 to 1970 in English Canada. Creating Historical Memory explores the wide range of careers that women have forged for themselves as writers and preservers of history within, outside, and on the margins of the academy. The authors suggest some of the institutional and intellectual locations from which English Canadian women have worked as historians and attempt to problematize in different ways and to varying degrees, the relationship between women and historical practice.

The authors raise many interesting questions about how gender influences historical consciousness and whether looking at the past through women's eyes alters the view. Women engaged in history in a wide variety of ways -- as authors of fiction, popular history, juvenilia, and drama -- as well as more academic research and publishing. They worked as individuals, as both professional writers and academics, and within formal and informal communities of women such as religious groups or local clubs. The essays also talk about the barriers that existed for women who wanted to be recognized as historians and teachers of history and point out how gender differences have coloured perceptions of what constitutes history and who should write that history. This anthology shows how, instead of being intimidated or defeated by their marginalization, women developed new and interesting ideas about what constituted history. The final essay in the volume assesses the impact the burgeoning of feminist history in the 1970s had on the academy and examines the connection between feminist activism and women's history.

This original and lively book highlights the pioneering efforts of women in developing alternate paths to historical expression. It makes an important contribution both to Canadian historical studies and to women's and gender history in the West and will appeal to scholars interested in Canadian history, women's studies, literature, and historiography.