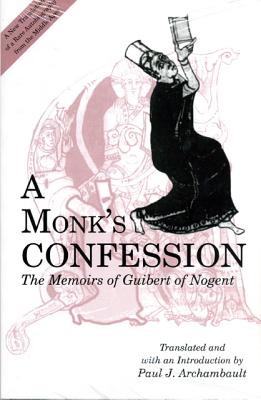 A Monk's Confession: The Memoirs of Guibert of Nogent

By: Abbot of Nogent-sous-Coucy Guibert

A clean, unmarked book with a tight binding. 225 pages.

A Monk's Confession is the first completely new English translation of Guibert of Nogent's remarkable memoirs in over seventy years. Written around the year 1115, they offer an unparalleled look at the life of a monk in the Middle Ages. Guibert, who lived his entire life in northern France, called these memoirs his book of monodiae, or solitary songs. Many scholars consider them the first Latin autobiography in the West after Augustine's Confessions.

Readers will be stirred and surprised by Guibert's intense preoccupation with the sinfulness of his soul, his visions of demons and necromancy, and his frank struggle to come to terms with his sexuality. But Guibert is also a valuable witness to his age. In addition to his personal history, his memoirs give a brief chronicle of the abbey of Nogent--where he served as abbot for some twenty years--and a vivid account of the bloody uprising of the Laon Commune in 1112. His observations give precious insight into education, monastic life, and the beginnings of the great medieval towns.

Paul J. Archambault's translation successfully renders Guibert's Latin--at times stylish, at times rustic--into lively, modern English. He consulted Edmond-Ren Labande's authoritative 1981 Latin edition with French translation. He provides a complete introduction and annotation that help situate Guibert within the history and literature of the Middle Ages while permitting readers to judge for themselves how to interpret this fascinating voice from the past.

Title: A Monk's Confession: The Memoirs of Guibert of Nogent

A Monk's Confession: The Memoirs of Guibert of Nogent