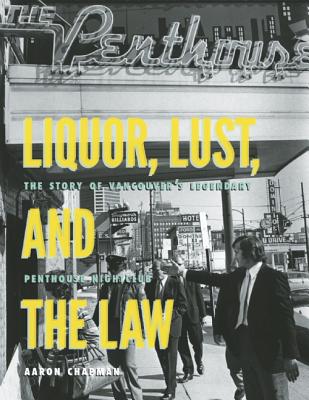 Liquor, Lust and the Law: The Story of Vancouver's Legendary Penthouse Nightclub

Few Vancouver nightspots evoke such a fabled history as the Penthouse Nightclub. Founded in 1947 by the Filippone family, the Penthouse became the place to see and be seen in Vancouver in the 1950s and '60s; acts like Sammy Davis Jr., Nat King Cole, and Duke Ellington regularly performed on the Penthouse stage, and the venue was one of the few in town not only to welcome African American entertainers, but to lodge them as well, at a time when Vancouver hotels refused to. Audiences often included visiting stars such as Frank Sinatra, Errol Flynn, Gary Cooper, and many others.

In the 1970s, the Penthouse became infamous for its exotic dancers, resulting in a colorful, lurid history involving vice squads, politicians, judges, and con men, and culminating in the murder of co-owner Joe Filippone in the Penthouse's office in 1983. However, through decades of evolving social mores and changing cultural styles in a city constantly trying to reinvent itself, the Penthouse has somehow survived, a testament to its storied history and the fortitude of the Filippone family that still owns it.

Rife with nostalgia and just a hint of scandal, "Liquor, Lust and the Law" is a fascinating history of a Rat Pack-era nightclub that also reveals a darkly beautiful and slightly naughty view of Vancouver after dark.

Aaron Chapman is a writer and musician with a special interest in entainment history. He lives in Vancouver, British Columbia.

Title: Liquor, Lust and the Law: The Story of Vancouver's Legendary Penthouse Nightclub

Liquor, Lust and the Law: The Story of Vancouver's Legendary Penthouse Nightclub