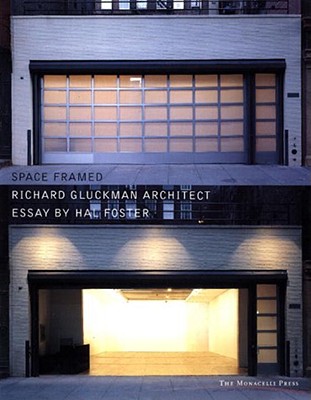 From one of his earliest projects for Heiner Friedrich and Philippa de Menil, founders of the Dia Art Foundation in New York, Richard Gluckman has closely aligned his work with the world of art and artists. Over the past twenty years, Gluckman has created distinctive spaces for numerous art galleries and museums and developed installations with such notable contemporary artists as Dan Flavin, Richard Serra, Jenny Holzer, and Walter de Maria. But Gluckman's vision extends beyond art world commissions to include residential, commercial, and public projects. Deeply informed by the minimalist and site-specific artists Gluckman has encountered throughout his career, his work displays a consistent restraint that, as Gluckman himself writes, "allows for more emphasis on the basic architectural components: structure, scale, proportion, material, and light." The result is an architecture of powerful simplicity that has been applied to a wide variety of projects throughout the world.
"Space Framed: Richard Gluckman Architect" presents thirty-eight buildings and projects with carefully composed photographs and detailed presentation drawings. Featured projects include various buildings for the Dia Center for the Arts in New York, the Andy Warhol Museum in Pittsburgh, the renovation and addition to the Whitney Museum of American Art in New York, the Fort Worth Modern Art Museum Competition, the Deutsche Guggenheim Berlin, and the Museo Picasso in Malaga, Spain. In addition to generous illustrations and an introduction by the architect, "Space Framed" features an insightful essay by noted critic Hal Foster.

Description: A clean, unmarked book with a tight binding. 240 pages.