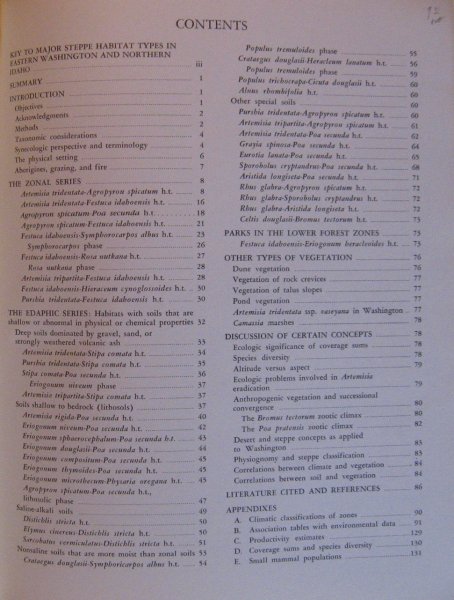 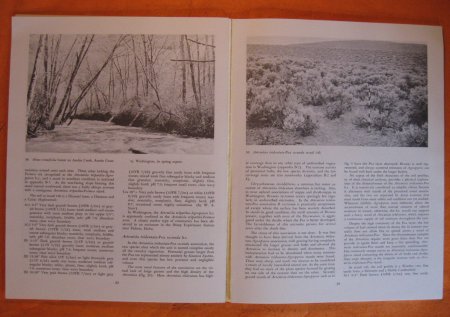 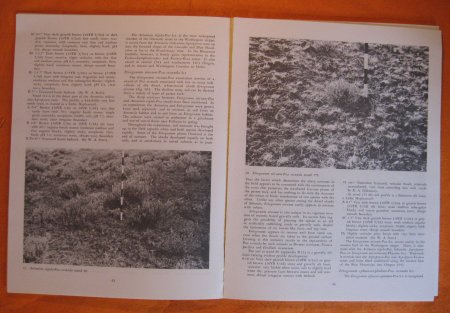 131 pages in large format. Contents include Key to major steppe habitat types in eastern washington and northern idaho, with sections on The zonal series,( Artenisia tridentata-agropyron spicatum ; Artemisia tridentata-Festuca idahoensis; Agropyron spicatum-Poa secunda; Agropyron spicatum-Festuca idaboensis (etc.) The edaphic series, (Deep soils dominated by gravel, sand, or strongly weathered volcanic ash (with 4 Latin listings) Soils shallow to bedrock (with 8 Latin listings) Saline alkali soils, nonsaline soils that are more moist than zonal soils, and Other special soils -- (all with similar Latin listings) Parks in the lower forest zones, Other types of vegetation (Dune vegetation Of rock crevices, Of talus slopes, Pond vegetation, etc. , Discussion of certain concepts ( Species diversity, altitude versus aspect, Ecologic problems involved in Artemisia eradication etc. With five appendixes. Introduction reads "More than 24,000 square miles of land in the eastern half of the State of Washington are too arid to support natural forest on the uplands. When first seen by white man a century and a half ago, the region was a steppe. The study here reported attempts to determine the character of the vegetation mosaic as it was when white man appeared on the scene, to establish the broad relationships of the different community-types to climate and soil, and to determine how fire and grazing modify the types." With maps, "stand numbers" and b&w photos.