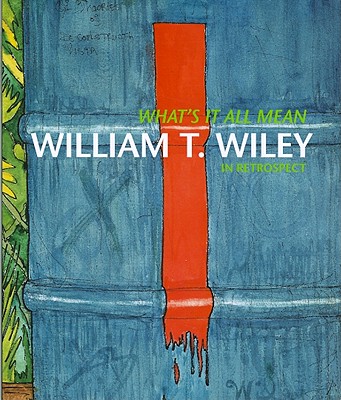 What's it All Mean: William T. Wiley in Retrospect

Book is in excellent condition, as new, with bright red cloth covers, white print on spine only. Binding is solid and square, covers have sharp corners, exterior shows absolutely no blemishes, text/interior is clean and free of marking of any kind. Dust jacket is as new also, no tears or mars of any kind, wrapped in clear protective cover. Exhibition catalog for shows at the publishers galleries 2009 -- 2010. 228 pp., over 130 illustrations, most in color, many full page prints in lavish detail. The first major retrospective, the book features Wiley's use of traditional drawing, watercolor, acrylic painting, sculpture, printmaking and film covering his entire career through 2008. His art has been described as eccentric, hermetic, idiosyncratic, irreverent, enigmatic, paradoxical, and more.

The retrospective exhibition of the work of William T. Wiley that this publication accompanies is the first to be organized since 1979, when Wiley Territory opened at the Walker Art Center in Minneapolis. Thirty years later, What's It All Mean: Willliam T. Wiley in Retrospect, considers the artist's entire career (including films) through 2008. The art of William Wiley (b. 1937) has stood the test of time in the face of changing styles, successive movements, critical theories, and passing fashion. Wiley's self-deprecating humor and sense of the absurd make his art accessible even to those who do not comprehend his more ambiguous ideas, allusions, narratives, private symbols, and layers of meaning. His liberal use of puns makes more palatable his deadly serious commentary on war, pollution, global warming, racial tension, and other threats to contemporary civilization. Wiley is best known as a leading California artist, whose influence and importance in the San Francisco Bay area are well established. This exhibition and catalogue affirm his significance as an artist of national stature whose accomplishment resonates well beyond the region in which he has chosen to live and the time period when he first achieved recognition.

Title: What's it All Mean: William T. Wiley in Retrospect

What's it All Mean: William T. Wiley in Retrospect