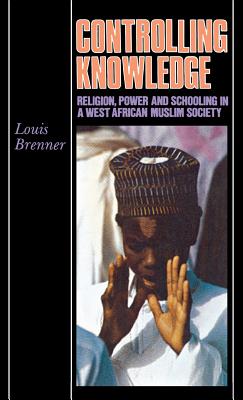 Book is in excellent condition. Binding is solid and square, covers have sharp corners, exterior shows no blemishes, text/interior is clean and free of marking of any kind. Dust jacket shows some signs of shelf wear only, no tears. 343 pages. Chapters include Knowledge and power in pre-colonial Muslim societies; Medersas, French and Islamic; Reform and counter-reform: the politics of muslim schooling in the 1950s; Discourses of knowledge, power and identity, Power relations in the postcolony; The dynamics of Medersa schooling, et. al. Note the megalisters (book warehouses who conveyor list by the pallet) got the title wrong.

I know of no one who has taken such an ambitious swath of time and done such a good job of showing the continuity and change across those one hundred years.... a splendid achievement, the result of decades of research and reflection." --David Robinson

Controlling Knowledge examines the history of West African Muslim society in the Republic of Mali, formerly the Soudan Fran ais, in the 20th century. Focusing on the transformation of Muslim institutions--especially modernized Muslim schools (m dersas) and voluntary organizations--over the past hundred years, Louis Brenner uncovers the social and political processes that have produced new forms, definitions, and expressions of Islam that are patently different from those that prevailed a century earlier. Brenner's study shows that Muslim society in Mali is religiously pluralistic and that it has developed different ways of relating religious obligations to prevailing social and political conditions. Although they were heavily influenced by French and Middle Eastern models, Brenner demonstrates that it was in opposition to French colonial authority that the first m dersas and voluntary associations appeared. The complex array of power relations within which these institutions evolved, under French colonial rule and in the postcolonial secularist state, is revealed in this thoughtful book. Controlling Knowledge makes a major contribution to our understanding of Muslim history in Mali and West Africa, both in recent decades and over the long term.