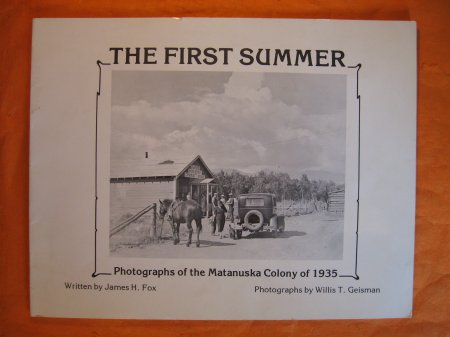 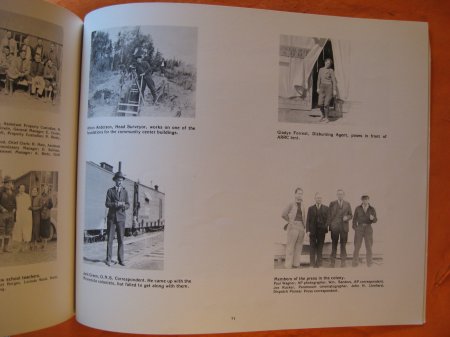 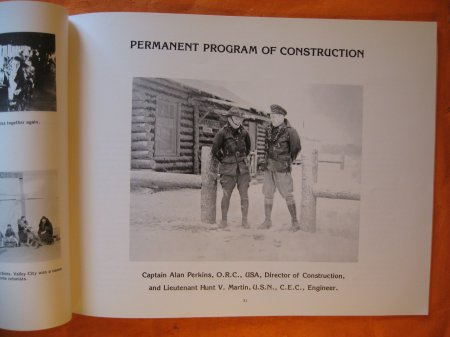 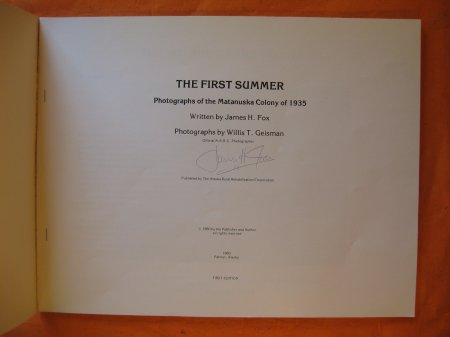 The First Summer: Photographs of the Matanuska Colony of 1935

Book shows light wear only to oversize covers: two marks at spine on front cover, a little bit of corner wear, back upper corner is turned out slightly, covers show scuffing. Binding is solid and square, text/interior is clean and free of marking of any kind. 80 pages with usually four captioned b&w photos per oversize page, with chapter introductions, usually one page. Chapters include: Voyage of the North Star, Arrival of the Colonists, Drawing for the Land, Permanent program of construction, Colonial life, Farming, Personalities and personnel, Transient camp life. Signed by the author on the title page. Rare. In 1935, the Federal Emergency Relief Administration created an experimental farming community known as the Matanuska Valley Colony as part of the New Deal resettlement plan.[1] Situated in the Matanuska Valley, about 45 miles northeast of Anchorage, Alaska, the colony was settled by 203 families from Minnesota, Wisconsin and Michigan. The Matanuska Colony was part of Franklin D. Roosevelt's New Deal plan to help move the United States out of the Great Depression. It was one of many rural rehabilitation colonies to be established by the Federal Emergency Relief Administration (FERA). Others included Cherry Lake Farms in Florida, Dyess Colony in Arkansas, and the Pine Mountain Valley Rural Community in Georgia. In 1935, Americans in rural areas of northern states were among the worst sufferers of the Great Depression. In order to alleviate some of the pressures upon these areas, the FERA commissioned applicants from the northern states of Minnesota, Wisconsin, and Michigan to colonize a tract of land in the Territory of Alaska. The administration chose these three northern states because of their climate and belief that representatives would be well suited to survive harsh elements of subarctic winters. The hope was that the colony candidates would be good farmers with the necessary skills and hardiness required for self-sufficiency in the harsh Alaskan environment. Each family was to receive a 40-acre plot to turn into farmland. From conception to realization, the project progressed rapidly. A survey was made of the Matanuska Valley in June 1934 to ascertain its agricultural viability. Some of the information that would have proven to be useful in planning the colony was not even available until after colonization had begun. Nonetheless, the following January, FERA and Department of the Interior agreed to undertake the project. A few weeks later, 80,000 acres of land was set aside for the project and, by April, the first construction workers and colonists left for the valley. According to historian Orlando W. Miller, a total of 241,332 acres were initially set aside for the colony, with an additional 7,780 acres added later on to provide more continuity between the farms. After all, it was supposed to be a colony with startup assistance from the government. In effect, they wanted to keep the farms together in a single area as opposed to being spread out across the vast region reserved by President Roosevelts Executive Order 6957 of 4 February 1935. Colonists began to arrive to their new home in early May 1935. There was very little ready for them as far as housing and supplies. Colonists were forced to stay on the train until transient workers could complete their temporary tent housing. Plots of land were given out through a draw, with the majority of the plots still forested. The colonists quickly got to work clearing their land in order to comply with the government contracts they signed. The Alaska Rural Rehabilitation Corporation (ARRC) was the governing body of the colony. The ARRC regulated the commissary, what was planted, as well as the activities of the colonists. It was also in charge of removing colonists who did not continue to meet expectations. Colonists who were in poor health, broke major rules, or were bad farmers could be asked to leave. There were many major issues within this administration. Rules and regulations as well as administrators were constantly changing. Within a month of their arrival, the colonists were extremely unhappy with their conditions. Currently, the town of Palmer, Alaska, which descended from the Matanuska Valley colonists, is home to many of the children of the settlers. Some of the original structures from the colony, including a church and barn, have been moved to the Alaska State Fairgrounds. Other remnants of the colony include the lush crops of the valley. Although the colony was not a booming success, it did become stable enough to provide dairy and farming. It did not significantly increase the population of the area, but it did develop the Matanuska Valley as the primary agriculturally productive region within Alaska. During the latter part of the twentieth century, the Matanuska Valley saw continued success with dairies and farming for local consumption. However, a number of factors limited their commercial success. With the decline of air and refrigerated freight costs, milk and other dairy products from the Pacific Northwest could be obtained for less than locally produced products. In addition, as the population of Anchorage grew to make it the largest city in Alaska, residents began to look towards the Matanuska Valley to build homes. Farm land became more expensive and taxes increased. As a result, many farmers sold their land to developers. (from Wikipedia)

Title: The First Summer: Photographs of the Matanuska Colony of 1935

The First Summer: Photographs of the Matanuska Colony of 1935