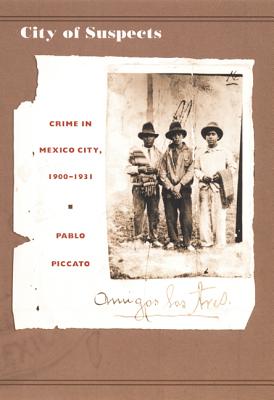 Book is brand new and in excellent condition. Binding is solid and square, covers have sharp corners, exterior shows no blemishes, text/interior is clean and free of marking of any kind. 365 pages.

In City of Suspects Pablo Piccato explores the multiple dimensions of crime in early-twentieth-century Mexico City. Basing his research on previously untapped judicial sources, prisoners' letters, criminological studies, quantitative data, newspapers, and political archives, Piccato examines the paradoxes of repressive policies toward crime, the impact of social rebellion on patterns of common crime, and the role of urban communities in dealing with transgression on the margins of the judical system.
By investigating postrevolutionary examples of corruption and organized crime, Piccato shines light on the historical foundations of a social problem that remains the main concern of Mexico City today. Emphasizing the social construction of crime and the way it was interpreted within the moral economy of the urban poor, he describes the capital city during the early twentieth century as a contested territory in which a growing population of urban poor had to negotiate the use of public spaces with more powerful citizens and the police. Probing official discourse on deviance, Piccato reveals how the nineteenth-century rise of positivist criminology--which asserted that criminals could be readily distinguished from the normal population based on psychological and physical traits--was used to lend scientific legitimacy to class stratifications and to criminalize working-class culture. Furthermore, he argues, the authorities' emphasis on punishment, isolation, and stigmatization effectively created cadres of professional criminals, reshaping crime into a more dangerous problem for all inhabitants of the capital.
This unique investigation into crime in Mexico City will interest Latin Americanists, sociologists, and historians of twentieth-century Mexican history.