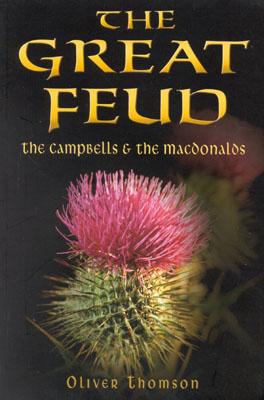 The Great Feud: The Campbells & the Macdonalds

Book is brand new and in excellent condition. Binding is solid and square, covers have sharp corners, exterior shows no blemishes, text/interior is clean and free of marking of any kind.

An account of the remarkable rivalry, sometimes bloody conflict, between two great families which originated on the west coast of Scotland - the Campbells and the MacDonalds. Starting with the violent death of the Campbell chief in 1297 the feud then went on for 450 years in Scotland and Northern Ireland, with numerous cullings and clashes inflicted by both sides, amongst which the incident in Glencoe just happens to be the best publicised. Yet despite the mutual antipathy both families continued to grow, to scatter over the world and to produce a large number of talented, energetic descendants including two British prime ministers (Campbell Bannerman and Ramsay MacDonald) and the first Canadian prime minister. The second half of the volume charts this more peaceful period after 1745 when large numbers of both clans spread rapidly around the world: transported as criminals, evicted in clearances, or simply seeking their fortune in peace or war. We follow the families in the American and Napoleonic wars, to India, the West Indies and Australasia. We meet politicians, poets, terrorists, sportsmen and women, entrepreneurs, world speed record holders and a mistress introduced to Kennedy by Sinatra. The fame of both families now rests on fast food (soup and burgers).

Title: The Great Feud: The Campbells & the Macdonalds

The Great Feud: The Campbells & the Macdonalds