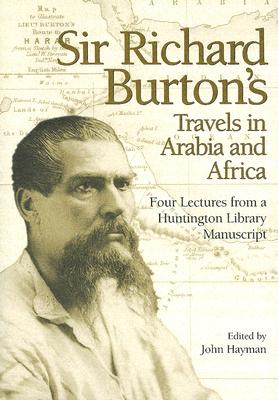 Book is in excellent condition in every respect. Binding is solid and square, covers have sharp corners, exterior shows no blemishes, text/interior is clean and free of marking of any kind. 109 pages, as new.

Sir Richard Burton (1821-1890)--explorer, linguist, anthropologist--was one of the most fascinating figures of the Victorian era. In 1866, while serving as British consul in Brazil, he presented four lectures on the highlights of his travels in Arabia and Africa. The first two lectures describe the visits Burton made to Medina and Mecca disguised as an Islamic pilgrim. The rites of pilgrimage, framed by the drama of Burton's disguise and its attendant dangers, are described in extensive and sympathetic detail. The next two lectures are dramatic accounts of Burton's journeys to Harar and Dahomey, and of his mission to persuade King Gelele to give up the practice of human sacrifice. The vivid details he presents reveal not only the characteristics of the cultures he encountered but also the prejudices of the culture he represented. Well received by critics when first published in 1990, this volume of lectures is now available in paperback.