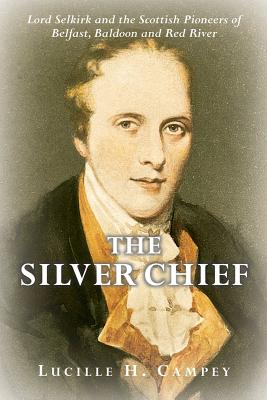 The Silver Chief: Lord Selkirk and the Scottish Pioneers of Belfast, Baldoon and Red River

Book is in excellent condition with very light shelf wear to covers only. Binding is solid and square, exterior shows no other blemishes, text/interior is clean and free of marking of any kind. B&W photos, maps, charts, tables.

Belfast, Prince Edward Island, founded in August 1803, owes its existence to Lord Selkirk. Its bicentennial is a timely reminder of Selkirk's work in Canada, which extended beyond Belfast to Baldoon (later Wallaceburg) in Ontario, as well as to Red River, the precursor to Winnipeg. Aptly named "The Silver Chief" by the five Indian chiefs with whom he negotiated a land treaty at Red River, the fifth Earl of Selkirk spent an immense fortune in helping Scottish Highlanders relocate themselves in Canada.

Selkirk has been well observed through the eyes of the rich and powerful, but his settlers have been neglected. Why did they leave Scotland? Which districts did they come from? Why did they settle in Canada? Why did Selkirk help them? How successful were their settlements? What impact did they have on Canadas early development? Did Selkirk realize his ambitions for Canada?

In answering these questions, Lucille H. Campey presents a new and powerful case for re-assessing the achievements of Selkirk and his settlers. Using a wealth of documentary sources, she reconstructs the sequence of emigration from Scotland to the three areas of Canada where settlements were founded. She shows that emigration took place in a carefully planned and controlled way. She reveals the self-reliance, adaptability and steely determination of the Selkirk settlers in overcoming their many problems and obstacles. They brought their rich traditions of Scottish culture to Canada and, in doing so, helped to secure its distinctively Canadian future. Together, Selkirk and his settlers succeeded against overwhelming odds and altered the course of history.

Title: The Silver Chief: Lord Selkirk and the Scottish Pioneers of Belfast, Baldoon and Red River

The Silver Chief: Lord Selkirk and the Scottish Pioneers of Belfast, Baldoon and Red River