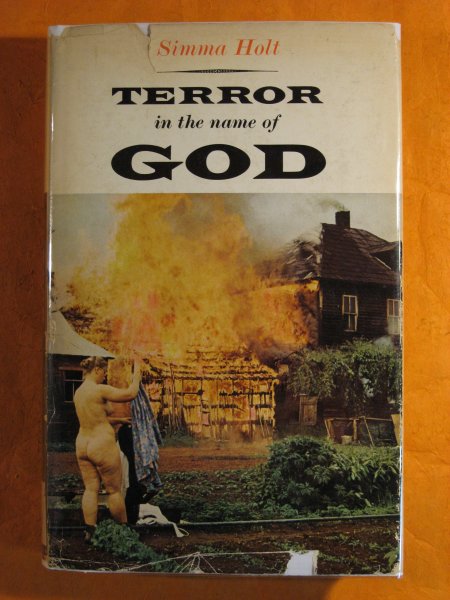 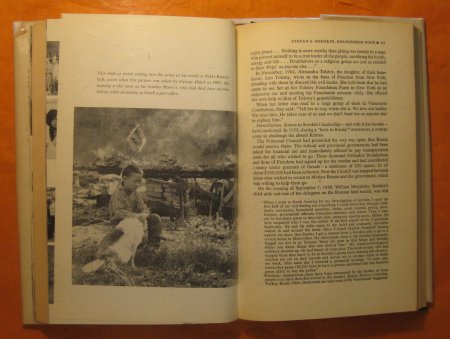 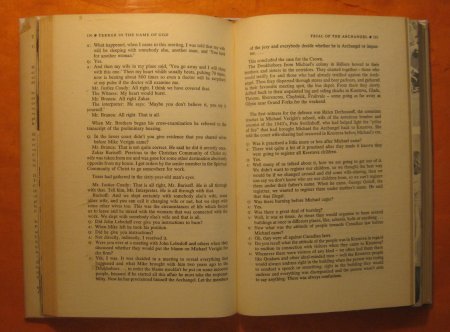 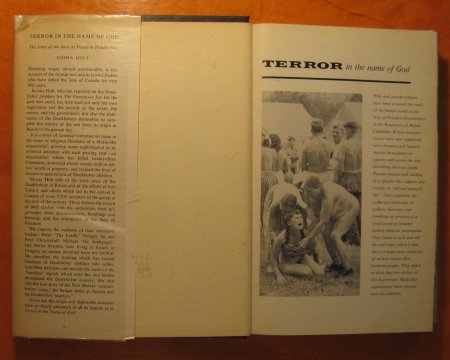 Terror in the Name of God

Book is in excellent condition with a bump to the back lower corner as the only flaw. Paper is age-toned with former owern's name on the front endpaper. Unusual photo essay before the page of contents showing a lot of nudity, fires, as does the dust jacket. Binding is solid and square, covers have sharp corners otherwise, exterior shows no other blemishes, text/interior is clean and free of marking of any kind. Dust jacket is completely tattered and in two parts, now wrapped in a protective cover. Many b&w photos. Text appears heavily biased to Ms. Holt's perspective as a solid citizen of the Canadian empire with her own obscure, strange and absurd religious beliefs. Dust jacket reads: "Shocking, tragic, almost unbelievable, is this account of the strange sect and its fanatic leaders who have defied the laws of Canada for over fifty years. (Uses) the records of the RCMP, the courts, and the government, (and) also the statements of the Doukhobors themselves to complete this history of the sect from its origin in Russia to the present day. It is a story of fanatical terrorism let loose in the name of religious freedom; of a Mafia-like organization growing more sophisticated in its criminal activities with each passing year - an organization which has killed twenty-three Canadians, destroyed almost twenty million dollars' worth of property, and warped the lives of successive generations of Doukhobor children." Map endpapers of the Kootenay district of B.C., many b&w photos.

Title: Terror in the Name of God

Terror in the Name of God