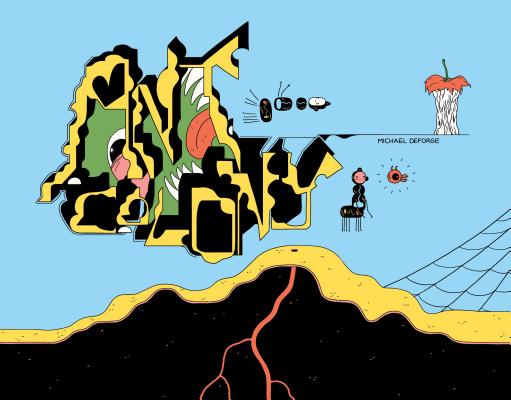 "Michael DeForge is that rare sort of cartoonist, a genuine artist with a unique vision and a teeming imagination. He's not trying to create sentimental pap for a mass audience. I love his work, but I do wonder why any sensible, profit-minded publisher would release this crazy book."--Chester Brown"DeForge is one of those rare comics naturals and "Ant Colony" proves it."--Jaime HernandezThe debut graphic novel from a dazzling newcomer with a singular, idiosyncratic style
In the few short years since he began his pamphlet-size comic book series "Lose," Michael DeForge has announced himself as an important new voice in alternative comics. His brash, confident, undulating artwork sent a shock wave through the comics world for its unique, fully formed aesthetic. From its opening pages, "Ant Colony" immerses the reader in a world that is darkly existential, with false prophets, unjust wars, and corrupt police officers, as it follows the denizens of a black ant colony under attack from the nearby red ants. On the surface, it's the story of this war, the destruction of a civilization, and the ants' all too familiar desire to rebuild. Underneath, though, "Ant Colony "plumbs the deepest human concerns--loneliness, faith, love, apathy, and more. All of this is done with humor and sensitivity, exposing a world where spiders can wreak unimaginable amounts of havoc with a single gnash of their jaws.
DeForge's striking visual sensibility--stark lines, dramatic color choices, and brilliant use of page and panel space--stands out in this volume.

Description: A clean, unmarked book with a tight binding.