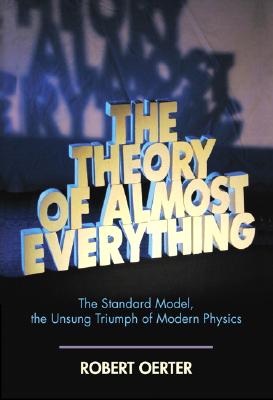 The Theory of Almost Everything: The Standard Model, the Unsung Triumph of Modern Physics

A clean, unmarked book with a tight binding. 328 pages.

The most successful and important theory in physics today, fully explained to general readers

Although many people are talking about string theory, it may only amount to a passing fashion: It hasn't yet been confirmed by experiment, the real test. What has? Where do we really stand? Robert Oerter shows what the next step in physics will without question be based on: "The Theory of Almost Everything"--the single theory that has dominated particle physics for the past 30 years. Cobbled together by many brilliant minds throughout the 20th century, and modestly known as the "Standard Model of Elementary Particles," it is the most wide-ranging and precise theory in the history of physics. From the chemical reactions that power all living things to the nuclear reactions that power the sun, except for gravity, it describes all known physical interactions.

Robert Oerter teaches physics at George Mason University. He received his Ph.D. from the University of Maryland. He has done research in the areas of supergravity, especially as applied to superstring theories, and in the quantum mechanics of chaotic systems. He lives in Maryland.
(c) Copyright Pearson Education. All rights reserved.

Title: The Theory of Almost Everything: The Standard Model, the Unsung Triumph of Modern Physics

The Theory of Almost Everything: The Standard Model, the Unsung Triumph of Modern Physics