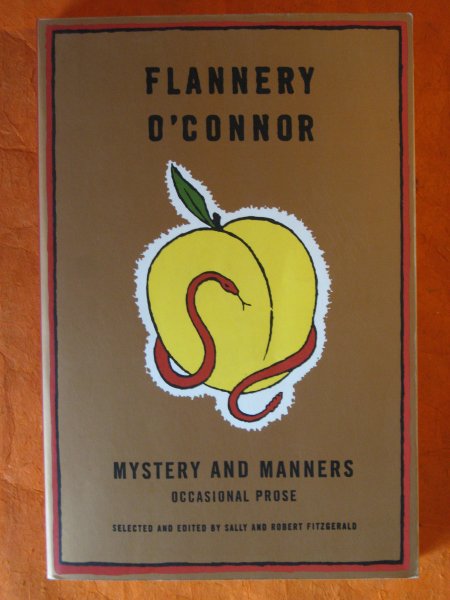 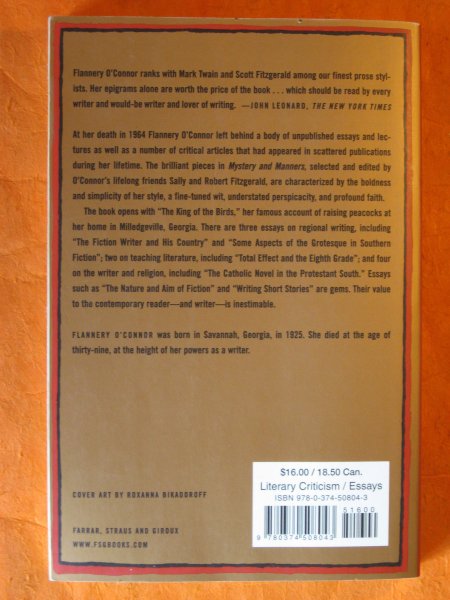 Book is in excellent condition, showing very light shelf wear only, with a little staining to upper page ends. Binding is solid and square, covers have sharp corners, exterior shows no blemishes, text/interior is clean and free of marking of any kind. Sections include: Aspects of the grotesque in southern fiction, The regional writer, Nature and airm of fiction, Writing short stories, Teaching literature, The Catholic novelist in the Protestant south

At her death in 1964, O'Connor left behind a body of unpublished essays and lectures as well as a number of critical articles that had appeared in scattered publications during her too-short lifetime. The keen writings comprising "Mystery and Manners," selected and edited by O'Connor's lifelong friends Sally and Robert Fitzgerald, are characterized by the directness and simplicity of the author's style, a fine-tuned wit, understated perspicacity, and profound faith.
The book opens with "The King of the Birds," her famous account of raising peacocks at her home in Milledgeville, Georgia. Also included are: three essays on regional writing, including "The Fiction Writer and His Country" and "Some Aspects of the Grotesque in Southern Fiction"; two pieces on teaching literature, including "Total Effect and the 8th Grade"; and four articles concerning the writer and religion, including "The Catholic Novel in the Protestant South." Essays such as "The Nature and Aim of Fiction" and "Writing Short Stories" are widely seen as gems.
This bold and brilliant essay-collection is a must for all readers, writers, and students of contemporary American literature.