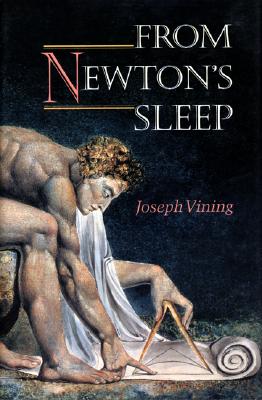 A clean, unmarked book with a tight binding.

What does the presence of law say of the beliefs of individuals in a society--their actual beliefs--about language, themselves, the world around them?

In a strikingly original work intended not only for practicing lawyers but for anyone interested in the modern dilemma of the loss of meaning, Joseph Vining invites us to reconsider law as a unique form of thought, inseparably connected to everything in the world that makes up human identity. Oliver Wendell Holmes asserted at the end of the nineteenth century that human law is ultimately a phenomenon in quantitative relations to its causes and effects, and many have been left with an impression of law as a set of processes and rules. Vining takes issue with this and with various reductionist attempts in scientific thought today to express the universe in a single mathematical description of forces, as well as with post-structuralist speculation that there are no valid truth claims, and that human inter-action can be reduced to analysis of power relationships. Law, he argues, is an independent discourse, not reducible to any other, that exists only in human interaction and reflects continuing human worth. Vining's search to reinstate the spiritual dimension in public discourse brings him head-on with a wide array of powerful academic forces: linguistics theory, political science, the new historicism, and the traditional teaching of law.

This book consists of a collection of what Vining calls "amplifications" of the implied text of the law--impressions, commentaries, vignettes, poems, and dialogues--which illustrate aspects of conventional legal language and logic, and the subjects legal practice regularly deals with, such as promises, death, and crime. Throughout we see that law reaches deeply into the way we know ourselves and other persons, all of whom speak through law as law connects language to person and person to action. The texts generated by legal method constitute the living record of social acquaintance and contest, speaking across cultures and across centuries. It is the close reading of legal texts and contexts, Vining argues, that provides the present source of the transcendental in modern secular life. But unlike the other academic arts of interpretation, law alone is directly connected with the most real, the most particular and, at the same time, the most universal facts of social life.

From Newton's Sleep poses ultimate questions for a century that now approaches its end, casts doubt on certainties past and present, and creates new grounds for skepticism and conviction. The fragmentary form of the book mirrors its subject. It is intended to be picked up and read as occasion allows, especially at evening, by lawyers and all their fellow nonlawyers.